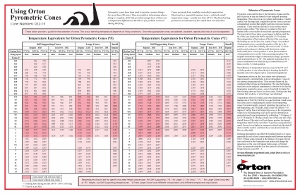 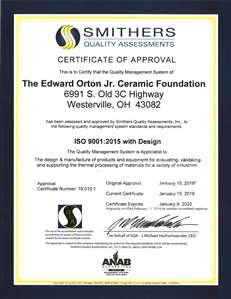 Cracking and Warping caused by Drying

R&M of a Kiln-Sitter

It is important to realize that the Orton Foundation does not test cones under all of the many firing conditions where cones might be used successfully nor is it possible for the Foundation to know the critical nature of the firing control needed for all types of products.  Changes in raw materials used in manufacturing of pyrometric cones may cause performance changes at firing rates or atmospheres different from Orton's standardizing conditions.  Therefore the Orton Foundation encourages users with critical applications to check the performance of cones under their actual conditions of use.  Each package of cones is identified with both cone and batch numbers so that the user may independently determine whether a new batch performs the same as the batch presently used before putting the new cones into service.  By doing this, any changes in performance can be observed and recorded, thus maintaing product quality.

If questions arise, please contact the Orton Foundation and one of our engineers will try to answer them.

If the cones are correctly mounted and respond in the expected manner, it is necessary to use some standard procedure for interpreting the degree of deformation as the tip deforms along the arc of a half circle.

Common practice has been to refer the tip position to hour positions on a clock face; that is, 2 o'clock, 4 o'clock, etc. See Figure 1. This is a fairly satisfactory way of estimating deformation except that it introduces the factor of human judgment. However, it is about the only satisfactory way of making the estimate in a dynamic condition where the cone is continuously bending. When cones are being used to study heat effects after the process has been completed, angular position of the cone tip is a more reliable measurement of deformation. Engineers at the Orton Foundation have developed simple devices for doing this which give a more accurate measurement than estimating clock position. Use of such a device is shown in Figure 2.

Fig. 2 “ More accurate measurement of cone deformation is achieved by the use of a template.

Users of cones should realize that a unit of clock position does not necessarily represent a constant increment of temperature, even with a uniform heating rate. Cones tend to deform more rapidly as the extent of deformation increases. The effect is partially the result of the liquid glassy phase becoming less viscous (more fluid) and the mechanics involved in the bending cone. This is illustrated in Figure 3. With this particular cone, heated at the rate of 108°F per hour, one clock position deformation from 1 to 2 o'clock required a temperature increase of 5°C. As the deformation reached the end point, going from 5 to 6 o'clock only 1°C was required to effect the change of one clock position deformation. The approximate precision of Pyrometric cones in terms of temperature can be shown by combining the results of the frequency distribution curve with the data in Figure 3 for both Large and Self-Supporting cones. This is shown in Figure 4.

Using charts provided by Orton (upon request), equivalent temperatures can be determined from the final bending position of the Pyrometric Cone. Orton Self-Supporting Cones duplicate their bending behavior with a standard deviation of 2.4 angular degrees or less than ± 2°C. And only Orton cones are traceable to Standards established in 1956 by H.P. Beerman at the National Bureau of Standards (Journal of American Ceramic Society, Vol. 39 1956), Cones from other manufacturers tested by Orton have been shown to have variations as much as 10 times larger.

Orton Pyrometric Cones are dry pressed instead of plastic formed, providing less variability in performance, higher green strength and fewer mounting problems. All cone batches made by Orton are tested to match established standards. Materials are mixed, sampled and test cones made and fired on defined heating rates with Standard Cones. Small adjustments in the batch composition are made, as necessary, until bending performance matches the Standard Cones. This assures accurate, reproducible and traceable behavior for all Pyrometric Cones made by Orton.

Orton recommends using a template to measure the bending angle of the cone after firing, which is easy to read to within 5 angular degrees. Bending angle can be converted into a temperature using a table provided by Orton. For heating rates other than 60°C/hour, a graph is used to determine a temperature correction.

These Charts are available (by request) for all cone numbers sold by Orton.  A durable plastic template  is available for sale on our website. Using Self- Supporting Cones and Equivalent Temperature Charts from Orton, temperature differences can be determined within the accuracy of thermocouples or infrared pyrometers.

During the firing process, time, temperature and kiln atmosphere can influence the maturing of pyrometric cones, the same as any ceramic body.

The maturing of most ceramics occurs during the last 100°C of the firing process. This is also true for the bending behavior of a pyrometric cone. Since cones are time-temperature (heat work) indicators, then the heating rate will affect the end point (when the tip reaches a 90° angle) of the cone. Since most firing profiles incorporate a hold time, the actual or effective heating rate must account for this variable. As a rule of thumb, one can calculate the effective heating rate by determining the total time the ware is subjected to the last 100°C in temperature. As an example, assume that the kiln was heated to a top temperature of 1200°C and it took the kiln 2.5 hours to go from 1100°C to 1200°C. If the kiln was held at 1200°C for 1 hour and then cooled from 1200°C to 1100°C in 0.5 hours, then the total time for the top 100°C would be 4 hours. The effective heating rate is estimated by dividing 100°C by 4 or 25°C per hour. Orton provides temperature conversion tables and charts that allow the bending angle to be converted to an equivalent temperature, if the heating rate is known. This allows for determination of temperature differences within a kiln or a kiln car.

The ceramist knows that kiln atmosphere can have major affect on reactions and the properties of his ware. Since cone deformation is brought about by thermochemical reactions, they can be expected to be affected by the atmosphere in which they are used. Fortunately, the conditions that influence product properties generally have related effects on cone behavior, so that the relative behavior of cones does not change and they are still a useful tool for evaluating temperature distributions within the firing zone of a kiln. The environmental conditions in a kiln most likely to influence cone behavior are:

Reducing atmospheres can have an adverse effect on the deformation behavior of cones. The low temperature cones, containing glass frit with metal compounds, are especially sensitive to reducing conditions. Also, under reducing conditions, the organic binder cannot be fully oxidized and as a result, these cones may bloat and turn black (see Trouble Shooting section for descriptions of cone problems). Bloating will alter cone deformation characteristics. The "red cones (those containing iron oxide-cones O10 to 3) are also adversely influenced by reducing conditions and will have a green to black appearance after firing.

All cones that do not contain lead or iron oxide (cones O19 through O11, "Iron Free O10 through 3, and cones 4 through 42) can be used satisfactorily in reducing atmospheres provided the organic materials normally present in cones are fully oxidized (burned off) before resorting to a reducing atmosphere. Heating cones to 800-850°F in air will burn off the organic binders. PCE Cones or cones which are pre-calcined have been successfully employed where the entire firing is under neutral or reducing atmospheres.

Cones and most ceramics will generally mature sooner, or at a lower temperature, when fired in a reducing atmosphere as compared with oxidizing conditions. Pre-calcining cones may alter deformation characteristics if they are heated into a region where glass begins to form, so users requiring such treatment should establish their own procedures and controls through testing.

The practice of "flashing a kiln (alternate oxidizing and reducing atmospheres) does not normally have an adverse effect on cone deformation.

Kiln atmospheres which are either sulphurous or reducing may cause some cones to develop a rigid "shell with an interior that becomes fluid, therefore, producing erratic deformation. This shell occurs due to a change in the chemical composition of the cone surface.

Improved Iron-Free Cones, O4 through 3 (available since 1976) and all cones hotter than cone 3 may be used satisfactorily in a sulphurous atmosphere.

"Hard shelling may also be encountered with regular cones O10 through O3 in a high velocity or prolonged firing in a combustion atmosphere. This type of "hard shelling is caused by volatilization of boric oxide from one of the raw materials, glass frit, in the presence of high moisture air. "Hard shelling causes cones to deform at higher than normal temperatures. Severely "hard shelled cones do not bend in an arc but fall over stiffly like a fallen tree. They have a dry matte surface and sharp edges.

The improved Iron-Free Cones, O10 through 3 (available since 1976) are free of boric oxide containing frit and thus do not "hard shell from this cause.

The presence of water vapor, particularly in large quantities, will also influence cone behavior. In fact, even in small amounts, it can cause a cone to deform sooner than normal. The reason for this is that water vapor diffuses into ceramic materials during firing and causes changes in the vitrification process¹. This is the main reason that cones exhibit a different behavior in electric and non-muffled gas kilns. Even though water vapor in the products of combustion can run as high as 19%, it does not necessarily detract from the usefulness of cones because comparable behavior usually occurs in the properties of the ware.

Fly ash from solid fuel may settle on the cone and to some extent influence its deformation. Likewise, volatile products such as salt fumes, lead, and zinc compounds may produce a surface glaze on the cone, which may or may not influence behavior. The cutting action of flames can cause cones to develop melted tips or behave in other cause abnormal ways. If possible, cones should be protected from flame impingement and kiln drafts.

Radiation from hotter surfaces, or, if the cones are placed close to cooler surfaces, may also affect cone deformation, and, so far as is practical, cones should be protected from this condition as should the ware.

Most standard Orton cones do not contain iron oxide (LRB and SSB).  Only 14 of the Standard Orton Cones (LRB and SSB) between 010 and 3, contain iron oxide.  For applications that cannot tolerate "Iron Oxide", Orton developed an "Iron-Free" Series.  The designation for "Large" Iron Free cones in this range is IFB instead of LRB.  The designation for "Self-Supporting" Iron Free cones in this range is "SSK" instead of SSB.

The temperature equivalents are slightly different for the two series.  Therefore you should use all "standard series" or all "iron free series" between cone 010 and cone 3.

Orton ships cones worlwide and have manufactured Standard Cones continuously for 118 Years. Some of the cones listed in the table are no longer manufactured.

KPM (KÃ¶nigliche Porzellan-Manufaktur) in Germany stopped producing Seger Cones on December 31, 2001. Reimbold and Strick (member of the Torrecid Group) was the primary distributor of all German Seger cones throughout the world. Reimbold & Strick has been providing Orton pyrometric cones to their customers since 2001.

Artem Trofimov has joined Orton as a Product Specialist in our Instrument Department.   Artem's experience...

Orton is pleased to announce its partnership with Hot Disk of Gothenburg, Sweden representing Hot...